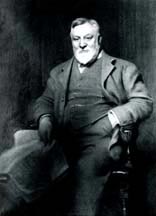 Arthur Lasenby Liberty was born in 1843 in Chesham, Buckinghamshire. After a brief schooling he was apprenticed as a draper in Baker Street, London. In 1862 he was taken on by Farmer & Rogers’ Great Shawl & Cloak Emporium in Regent Street and was eventually placed in charge of their oriental warehouse in Regent Street where he sold their Indian shawls, Japanese prints, drawings, lacquers, porcelain and silks.

In 1875 he left to open his own shop at 218a Regent Street selling Japanese silks. Liberty could only afford to employ a young girl of 16 and a Japanese boy. The shop sold ornaments, fabric and objets d’art from Japan and the East. Liberty initially concentrated on selling products made from Japan, but later imported goods from China, Java and Persia. Liberty also began producing his own range of distinctive textiles produced by Littlers at Merton.

Liberty gradually expanded his business and by the 1880s his shop had seven departments: Silks, Embroideries, Furniture, Carpets, Porcelain, Curios and Miscellaneous Items. In another shop in Regent Street, Arthur Liberty sold Japanese and Chinese antiques.

In 1905 the shop was remodeled with Liberty now selling furniture and a wider range of products. Liberty, the store, became the most fashionable place to shop in London and the fabrics were used for both clothing and furnishings. The name Liberty became synonymous with high quality fashion.

Liberty was knighted in 1914 and then retired with his family carrying on the business.