During the 17th century the East India Company imported from India cotton cloth called ‘calico’. It was printed in bright colours and, although very expensive, became very popular.

The new cloth alarmed the English woolen industry, which in 1700 obtained an Act of Parliament banning imported printed fabrics. As a result, merchants imported plain cotton and developed the techniques of printing it.

Before the cloth was printed it was bleached in crofting or bleaching grounds (large open areas of grassland cut by parallel, water-filled, ditches). First the cloth was immersed in an alkaline solution made from wood ashes, and then in sour milk. The cloth was then washed in the water-filled ditches and laid out on the grassland, enabling sunlight to bleach it. This was a slow process and took many months to complete; not until the mid- 1750s was the bleaching time greatly reduced by using dilute sulphuric acid for the souring. By the end of the century chlorine, in the form of bleaching powder, made new methods of mass-production possible. 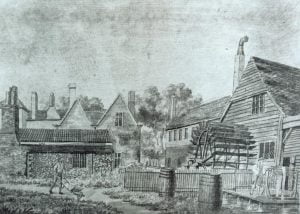 In 1724 a calico manufactory was established at Merton Abbey on the east bank of the River Wandle. The calico works probably adapted existing priory buildings for the use of printing and dying. In 1752 a second calico works was established within the walls of Merton priory. These works were located to the north of the Abbey Mills print works, close to Merton High Street, and in 1881 they were taken over by William Morris.

In 1784 John Leach had taken over the print works and a year later he was joined by a partner and traded as Leach and Howard. In 1786 the firm was called Leach and Co. Between 1787-1811 Leach was joined by various partners and the works were known as Newton, Leach and Co. (including Newton, Hodgson & Leach and other partners). Afterwards the company was called Newton, Leach, Greaves and Hodgson. It was said that they carried on “a very extensive trade” and had brought the art to “a great degree of perfection”.

In 1801 John Leach dissolved the partnership and set-up on his own constructing a range of print and dye houses on the west bank of the River Wandle and on the east bank, to the rear of the Merton Abbey print works. The large range of buildings to the south of the site were later to be known as “Bennett’s Mill”. It was at this time that Leach pioneered in new methods of madder production. In 1802 he invented his improved method of madder dyeing which involved using heated water with steam equipment which is listed in the survey of the works in 1802.

Between 1811 and 1819 the Merton Abbey Print works were in the hands of Newton, Langdale, Simpson & Co. Newton had previously been printing in Wallington. In around 1779 Newton had engaged a manager, the Irish designer, William Kilburn, to whom he sold the Wallington works in 1784. In 1781 James Newton was in partnership with James Morison and William Kilburn with a calico works in Wallington.

John Leach carried on his calico business to around 1811 when the works were in the hands of his son-in-law, Thomas Bennett for the production of colourful handkerchiefs. In 1821 the firm was called Bennett & Son. Thomas Bennett died in 1827 leaving his business to his son John. The firm continued production until 1833.

In 1820 Joseph Ansell had taken over Newton, Langdale Simpson & Co. works at Merton Abbey and in 1831 Edmund Littler took over the Merton Abbey works for the production of silks and fine fabrics. The Littler family were an established calico printing firm both in West Ham Abbey and Waltham Abbey in the Lea Valley. In 1833 Littler also acquired Bennett’s print works forming one large printing manufactory. Between c.1845-c.1862 the works were in the hands of Mary Ann Littler and around 1865 the works were in the hands of William and Edmund Littler. In 1875 Littler’s started to print goods for Liberty’s Regent Street shop and by the 1890’s, Littler’s were producing all of Liberty’s goods. The hand block printed quality that Littler used became synonymous with “Liberty Art Fabrics”. With the new Liberty’s commission Littler’s had made a number of alterations to the works. Between 1890 and 1894 the building located to the north of the mill house had been pulled down and a new brick block printing shop was erected to the south of the “Colour House”. This building was known as the New Shop (Later Cole’s Shop).

One surviving building from the early print works is the “Colour House” built around 1740-1750 and would have originally had two floors. In the 1890s this building was known as the “Coldmount”, a place where the printing fabrics were air dried. 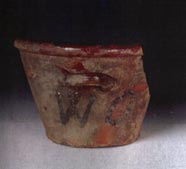 Liberty’s purchased the Merton print works in 1904. Shortly after Liberty’s acquired the site a number of the earlier weatherboarded buildings, including Bennett’s mill, were demolished. Liberty gradually replaced the old weatherboarded workshops in brick

In 1940 Liberty leased part of the factory, set aside for the screen-printing shop, to Parnall Aircraft Components Ltd. of Yate Aerodrome, Bristol Ltd., a Bristol based aircraft manufacturer. Parnall’s also leased the 1929 shop. The work included the assembling of gun turrets for the Bristol Blenhein Fighter Bomber. After the war in 1945 Liberty took back the building leased to Parnall’s and finally set up their screen-printing shop.

Liberty and Co. ceased production at the Merton Abbey Works in 1972, but textile production continued at Merton with Vita-Tex Ltd., Riseline Ltd. and finally Merton Fabrics Ltd. The premises finally closed in 1982.

Many of Liberty’s buildings still survive today and the site is currently used as a market called Merton Abbey Mills.

History of the 1752 calico works 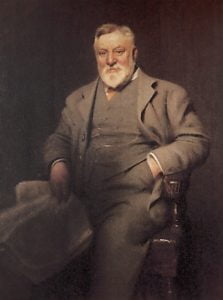 It is not certain who established these printing works. From around 1775 the works were occupied by Benjamin Vaughan & Son, and William Fenning and James Halfhide (calico printers and whitsters). By 1778 the works were occupied by Fenning, Halfhide & Co. Fenning was declared bankrupt in 1788 and the company name was altered to Halfhide & Sons, who continued production until that company finally went bankrupt in 1804/5. By 1805 a major alteration had divided the printing works into two properties. The gatehouse (James Halfhide’s former residence) was occupied by Charles Smith, whilst the printing works were operated by William West on a sub-lease. A more efficient mill house, better suited for calico production was erected on the site. 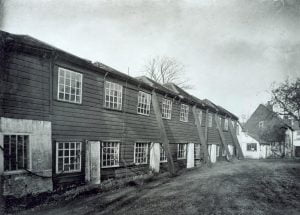 William West left in 1812 and a succession of companies then occupied the site, but only for short periods. From c1816 to 1834 the site was occupied by two separate industries, a leather factory and a silk works. In 1846 the site was leased to Thomas Welch who set up a table-cloth printing works. Welch was a successful printer who obtained a prize medal at the Great Exhibition in 1851. The works continued in his family until 1881 when William Morris purchased the site and established his stained glass, weaving, printing and tapestry works. These works finally closed in 1940.

by David Saxby of the Museum of London Archaeology Service