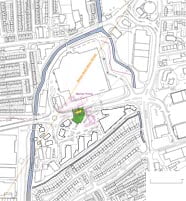 The aim of the Merton Priory project is ‘to establish and maintain in perpetuity an education centre on the site of the Chapter House of Merton Priory.’ A long term view.

Several aspects to this:
– physical building and remains
– friends of the Priory and community engagement
– education, scholarly, and web resources. 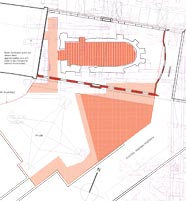 Two things.
– the plans for the priory – concentrating on the physical capital works.
– where we are with delivering them.

Site plan
The site is in green  and within this the Chapter House in yellow
see
– Wandle and its earlier course, to the east,
– Roman Road
– Merton Priory remains in purple and the precinct wall fragments.
Note:
– the orientation of Merton Priory and its placement.  None of the modern buildings follow the Priory geometry.
We have identified a phase 1 to be carried out over the next 5 years.
The aim of phase 1 is to make a few simple moves to transform the chapter house so that it becomes:
– a much better visitor experience with a ‘wow’ factor
– more visible and making a positive contribution to the area as a whole
– more usable. 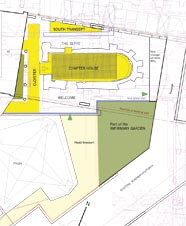 The proposals include:
– taking down the engineering brick wall that encloses the chapter house enclosure from the south
– putting a new glass wall in its place, flooding the place with light and warmth
– putting in a new block to contain WC, kitchenette and storage
– lowering the chapter house floor and installing a new level, heated floor so that it can be used in autumn and spring evenings
– relaying the cloister floor
– improving the displays
– creating a new entrance pathway from the south
– creating a new community garden on the site of the infirmary Garden
– site wide signage and interpretaion.
Click here for plans.
The north wall and the area of the church will be left for a later phase.

Ownership of the site is now with LB Merton, together with section 106 monies of about £400k.

The works are to be delivered in sub phases as follows:
Phase 1A.  The glass wall, storage block
Phase 1B  Other improvements within the chapter house
Phase 1C the community garden.

Phase 1B and C will be funded by other sources, and will follow on shortly after this, funded either by
–  a larger HLF grant
–  other smaller grants with the work in phases.
The aim is to achieve 20/80 leverage for all S106 monies.

What you can do to help

Comment on the proposals preferably in writing to info@mertonpriory.org