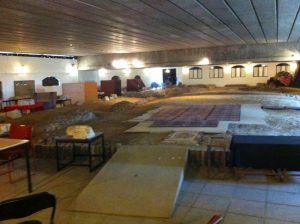 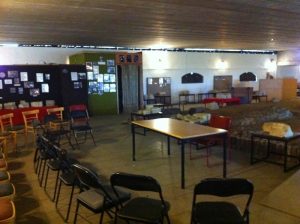 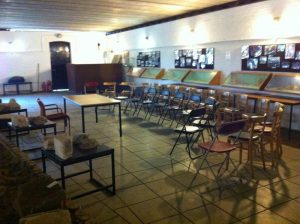 1 May 2011 – The Chapter house laid out ready for the 14th annual service of Nones. About 20 people visited the site, some expecting to hear the 14th ‘Friends of Merton Priory’ service of nones, remembering the day on which the priory was formally founded. This is how Heales describes the foundation, in his book The Records of Merton Priory (1898):

“… all… authorities concur in fixing the date of the foundation as 1117, except one manuscript [College of Arms; Arundel MS. 28], which gives so full and circumstantial an account of the proceedings that we may properly commence the History…at the year 1114. Henry (I) King of the English, gave the Ville pertaining to the Crown, called Meriton, or Merton, to Gilbert the Knight, formerly Sheriff, to possess freely in hereditary right: … [who] most liberally built a church at his own cost, and handsomely decorated it with paintings and other images… dedicated to the honour of the Most Blessed Mother of God, …Mary. … Gilbert had previously been Sheriff of the Counties of Surrey, Cambridge, and [probably] Huntingdon in which latter County the Order of Canons regular had flourished for some years in the church of St. Mary … it occurred to him to seek there advice and aid… [from] Rodbert, at that time sub-Prior [who]… accompanied by a few brethren was introduced to Merton and the church…endowed with adjacent land sufficient for two ploughs, and with a mill bringing in 60s. per annum. … Gilbert, the founder and patron, continued actively occupied for the benefit of the place…. The Convent was now transferred to [a] new building in … 1117; and many hastened thither. … The prior entered the …place… on the fifth of the nones of May (May 3), being the day on which the Lord’s Ascension was celebrated, the Brethren, who were now fifteen in number, entered the place of their new habitation, singing

[ The beginning of the sequence on Easter Day, on bringing back the Host from the Sepulchre where it has been deposited on Good Friday. Sarum processional; York Manual ( Surtees Soc. Ed. p. 175).]